Mainland Jazz Collective consists of a group of skilled, young jazz musicians, particularly devoted to jazz music of the 50s and 60s. They pursue the tradition of this soulful style, but they also take it to new places with their original compositions, and clever and playful arrangements. The hard swinging band has a broad and exciting repertoire, and its musicians show brilliant solo performances and play with great joy. They allways catch the audience's enthusiasm wherever they play! Mainland Jazz Collective is based in Stockholm, Sweden and has since its upstart in the summer of 2015 done numerous gigs and tours at jazz clubs, dances, restaurants, private events and more.

All the band members of Mainland Jazz Collective have graduated from, or are currently studying at the Royal College of Music in Stockholm. Some of them have also completed other notable jazz programs, such as the ones at Skurup and Framnäs Folkhögskola. All of them are also active freelance musicians with great expertise, contributing in countless musical contexts in Sweden and around the world.

Both the band and its individual members, have been allocated a number of awards and stipends. Here follows a selection of those: Faschings Vänners award (2017 & 2019), Stockholms Borgerskaps Musikstipendium in collaboration with KMH (Royal College of Music) (2017), Louis Armstrong-stipendiet (2017), Uno Naissoo Composition Competition Winner (2016), Ivar Rondins Stipendium (2016), award at Svensk Jazzfinal in Fasching (2015) 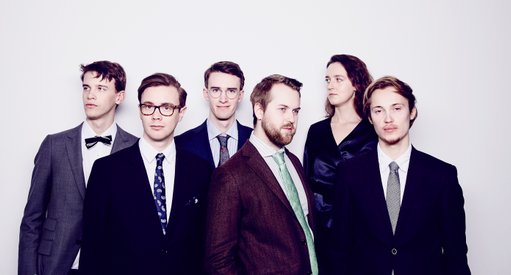 The most important source of musical inspiration, as well as band model for Mainland Jazz Collective, is the drummer Art Blakey and his band, The Jazz Messengers. The legendary jazz group was active no less than 35 years between 1955 and 1990, and included many of the greatest jazz musicians on every instrument during that time. Some of them were also among the most renown jazz composers, and Mainland Jazz Collective has chosento play quite a lot of music written by them - Wayne Shorter, Freddy Hubbard and Benny Golson, to name a few.

In some instances, Mainland Jazz Collective play arrangements from The Jazz Messengers' repertoire, more or less the same as the originals, to demonstrate the amazing set of tunes their repertoire comprise of. But the musicians of Mainland Jazz Collective are also skilled composers and arrangers, so in the band's repertoire, you also find several originals tunes, each with the artistic features of the band member who wrote it.

Mainland Jazz Collective also play music that's fitting for dance, and in lots of other situations. It's not at all uncommon that more or less surprising choices of tunes sneak their way into the program if the situations needs it, which usually is to the delight of the listeners!